CRETE. The Rethymno Renaissance Festival, one of the most successful institutions of the Greek summer, begins on 17th of August (lasting up to 31/8). Full of literary events and music, the festival integrates the city into an international network of thematic events that can help boost both tourism and prestige of Rethymno as a city of culture.

The Festival, whose Artistic Director is Ms. Artemis Papadakis, has been able to highlight historical sites and monuments of Rethymno and attach them to modern life. The program is indeed rich . Of great value are the two concerts that bring us close to the music universe of historical periods and places with special emotional meaning. On 18th of August, the “Ensemble Constantinople” will present a musical journey from the courtyard of “Versailles” to the grand palace “Chehel Sotoun” in the Isfahan, Persia and the “Topkapi Palace” in Istanbul ( Theatre Erophile -Fortezza).

On 22nd of August two distinguished soloists, will present "Music at the court of Queen Elizabeth."

Nikos Spanatis, counter tenor, and Katerina Ktona, harpsichord, will perform well-known songs from Shakespeare's plays and traditional English melodies of important Elizabethan composers, such as William Byrd, John Dowland, Robert Johnson, Martin Peerson, Thomas Morley and others. The sensitive counter tenor's voice and the gentle harpsichord sound promise a special musical evening. You can find the full program on the website of the Renaissance Festival. www.rfr.gr 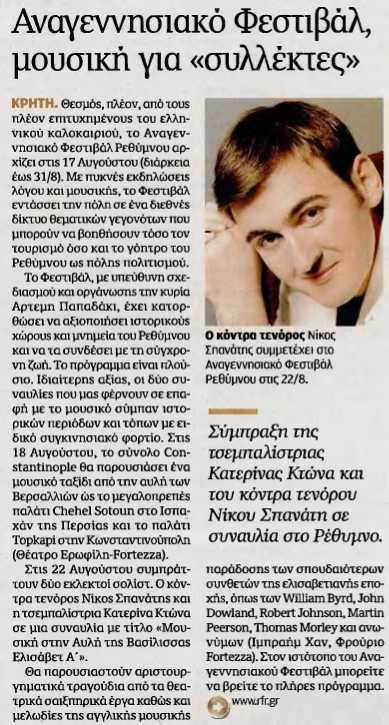