Belgian mystagogue in a church 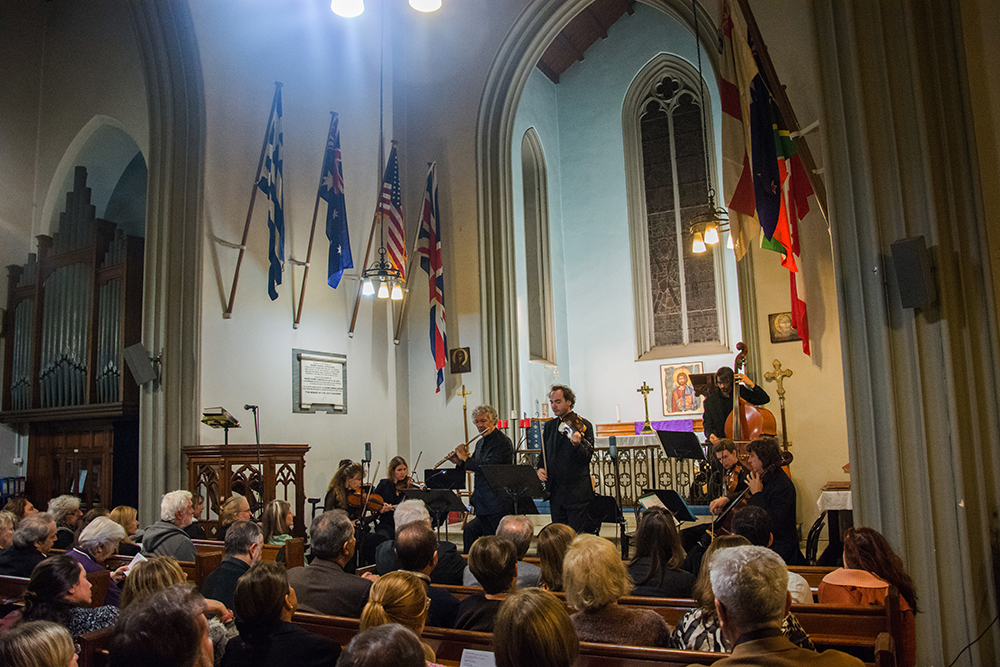 It has been an exceptionally interesting, uniquely delightful concert, the one given by Brussels Virtuosi orchestra from Brussels the other day at the St Paul's Anglican Church (01/12/2015). Founded in 1981 by virtuoso flutist Marc Grauwels, who is also its artistic director and conductor, this small ensemble of flexible composition is specialized in the performance of a rare repertoire, proposes programs with exquisite, full of surprises arrangement, has made an international career and has a large discography.

Between 28/11 and 30/11, the Belgian musicians gave concerts in Serres, Kavala and Piraeus. In those concerts, they proposed an appreciated light program, mainly focused on a full of hidden grace, neglected instrumental repertoire of the transition from baroque to classic era, with an anticipated emphasis on works for flute among which there were concerts of Domenico Cimarosa, Carl Philipp and Johann Sebastian Bach.

In their performance in Athens, which was repeated twice in the same day at the same venue, they added vocal works.

Taking over a double role of soloist/conductor, at the beginning of the concert Grauwels performed minuet for flute and orchestra ("Dance of the Blessed Spirits") from the "Orpheus and Euridice" opera by Gluck, as well as the rarely performed "Concert for violin, flute and orchestra" by Domenico Cimarosa.

Soloists and orchestra performed in an absolute coordination: not just technically, at the flow of the music, but, mainly, with a mutual correspondence of inconceivable immediacy regarding the malleable forming of expressivity by the first.

The sound of the flute was exquisite, with crystal clear articulation, vocal expressivity in its melodic delivery and seductively plastic performance of the dancing rhythm of the music, while its intercourse with the violin (Jean Frederic-Molard) was delightfully playful.

All the above composed a concert of high musicality, vibrating with euphoria. The nine-member ensemble's performance was of an excitingly rich expressive palette, too.

In the rest of the program, Belgian musicians accompanied soprano Vassiliki Karagianni and counter tenor Nikos Spanatis in works of vocal music.

Nikos Spanatis performed arias and operas by Vivaldi and Mozart. Sounding beautifully in the small venue of the church, his velvet, hedonically dark-colored voice enchantingly conversed with the flute at Vivaldi's aria from the "Orlando Furioso", while his elegant, gently emotional singing gave a touching performance of the aria from "Ascanio in Alba" by Mozart.

Instead of something relative to the spirit of the program - i.e. concert arias by Mozart - soprano Vassiliki Karagianni leveraged her crystal voice in "Vocalise" (1915) by Rachmaninoff and in "Nightingale" (1892-93) for soprano, flute and orchestra by Delibes.

She performed them exceptionally; however the discontinuity in relation to the total spirit of the evening was disappointingly evident.

After the end of the concert, we went out in the abuzz Fillellinon street, having enjoyed a precious intermission from the unbearable gloom of our domestic daily life. A wonderful ensemble which we would like and it would definitely worth it to hear it in more extensive, richer programs.