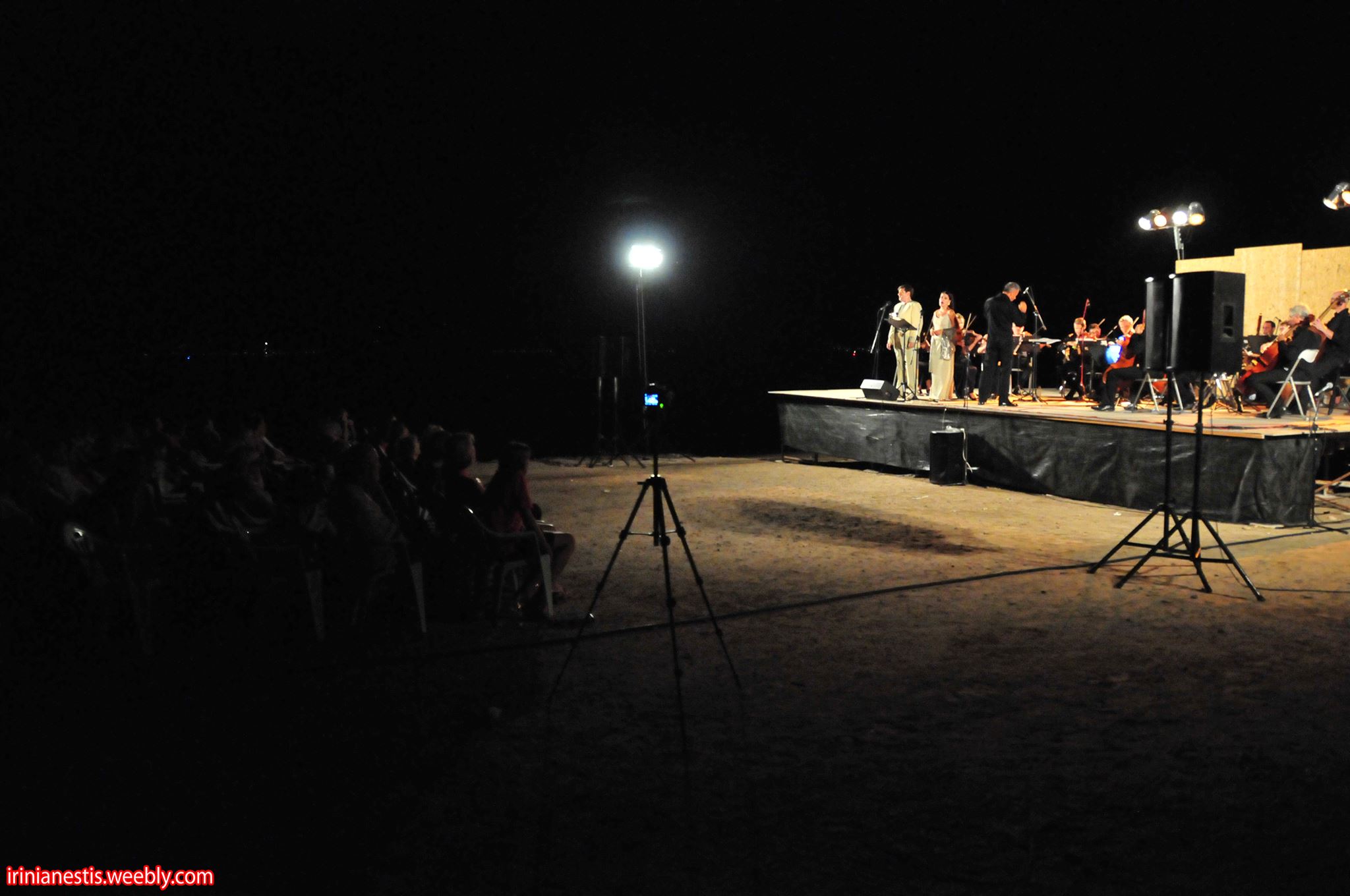 Aegina. At Avra Beach, next to the archaeological site of Kolona, just after the sunset, the island’s most renowned music festival is carried out every year.

In Lilika Nakos’ novel “Mrs Do re mi”, which describes the efforts of a French-raised girl to teach the lesson of singing in a village of Crete, there is a moment where the main character says to her students “today I will speak to you about Gluck”, and instantly the whole class burst into laughter and start shouting gluck-gluck-gluck-gluck-gluck…

So, when during the afternoon of Thursday 13th August, a small truck with a loudspeaker showed up in the streets of Aegina to ballyhoo that 10th Aegina International Music Festival would present a concert with works by Gluck and Mozart that night, and the music from “Orpheus and Euridice” poured out among olive and pistachio trees, we assumed that classical music is probably no longer something comically unfamiliar in our country.

In any case, those of us who succumbed to Orpheus’ charm visited Avra Beach that night, next to the archaeological site of Kolona. It is worth going there earlier, in order to enjoy the colors of the sky during sunset and gaze at the comings and goings of ships. The sense of soft sand under the feet and the sweet plash of the waves is certainly a luxury, equivalent to that of velvet and gold of opera theaters, to say the least. The concerts are given with microphone reinforcement – the ear gets used to that, but the truth is that, generally speaking, as a country with so many outdoor concerts, we might be able to be involved in finding a better solution one day.

The evening’s program was very well structured. The first part was dedicated to Christoph Willibald Gluck and the second part to Wolfgang Amadeus Mozart, even to his neglected side as a composer of serious opera (opera seria). Vassiliki Karayanni, soprano of National Opera and counter-tenor Nikos Spanatis sang. The fifteen string instruments of Musica Vitae Chamber Orchestra were accompanied by Maria Sifneos and Dimitri Safarian, oboe, Alex Callko, bassoon, and Nikos Mitrou and Dimitris Costis, horn. The concert was performed under the baton of Romanian conductor Tiberiu Soare.

After the symphony in G major for strings, Nikos Spanatis sang the virtuosic aria of Telemachus “Ah! non turbi il mio riposo” from the homonymous opera, one of the many serious operas that Gluck wrote besides his “reformatory” works, the first of which is certainly “Orpheus and Euridice”, excerpts of which were performed afterwards, in their original version in Italian language.
With Euridice’s aria “Che fiero momento”, Vassiliki Karayanni reminded us her already proven capacity in 18th century’s serious opera, while the counter-tenor performed, with the sense of the style and theatricality, the recitative and aria “Ahime! Dove trascorsi… Que faro senza Euridice” with very well-made phrases, a special expressiveness and proper technique. Both of them united their forces in the duet “Vien, appaga il tuo consorte”, in a beautiful bonding of voices and orchestra.

And the second part

The second part, dedicated to Mozart, opened up with Divertimento for strings K137. As in the respective beginning of the first part, the performance was vivid, technically and stylistically appropriate, however in such works someone expects the members to chat with each other enjoying total freedom, without having the sense that somebody conducts. The difference was noticeable compared to the melodramatic pieces, where we appreciated better the dramatic sense of the conductor, the proper perception of the style and the exceptional integration of the valuable contribution of wind instruments in the string ensemble.

Then we listened to the rare “Vorrei spiegarvi, oh Dio”, inline aria for soprano composed by Mozart in 1783 for the comic opera of Pasquale Anfossi “Il curioso indiscreto” (Rome 1777); however the aria is extremely “serious” and Vassiliki Karayanni performed it with emotion and sensitivity. Subsequently we listened, from Nikos Spanatis and Vassiliki Karayanni respectively, to Farnace’s aria “Venga pir” and Aspasia’s aria “Al destin, che la minaccia” from “Mitridate, re di Ponto”.

And, finally, Annio and Servilia’s duet “Ah, perdona al primo affetto” from “La clemenza di Tito”, ultimate masterpiece that only recently seems to be recognized for its value. The performances of both of the singers absolutely proved right not only the great composer but also his works that still wait for us to acknowledge them. After lively cheers, the duet “Vieni, appaga il tuo consorte from Gluck’s “Orpheus and Euridice” was performed once more.